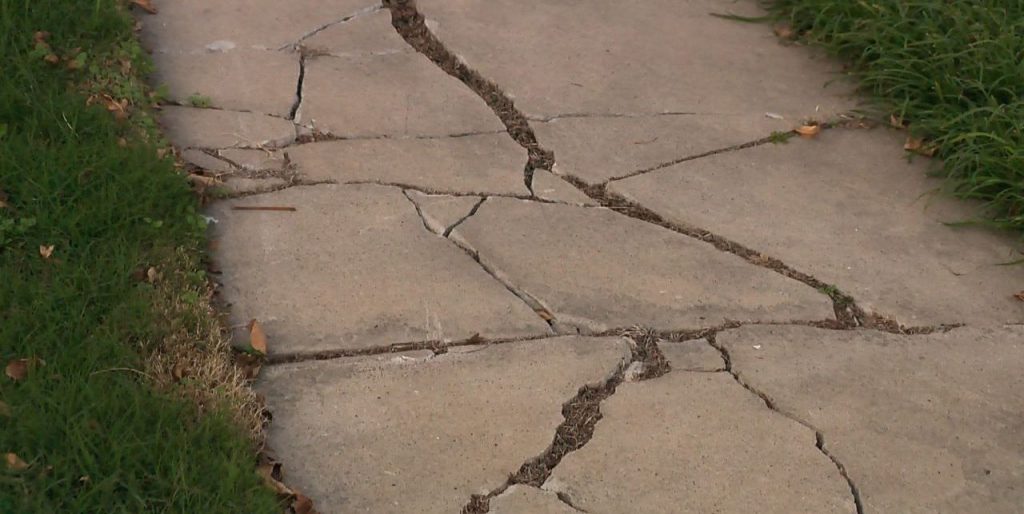 Having done a lot of landscaping work in and around Victoria BC with both interlocking pavers and large concrete slabs, we are often confronted with the question of whether the slightly higher expenses of pavers are justifiable. Here are our experiences around Victoria BC.

Generally speaking when people are looking to go with poured concrete they are looking for a solution that is sensitive to cost. Concrete pourers know this and need to find ways to cut costs in order to be competitive. As a result many less than reputable installers take shortcuts that are hidden but have major consequences down the line. What we have noticed is that in certain installations, there is insufficient excavation that was done and there is not enough gravel laid down before pouring. The consequence is that the concrete or asphalt cracks very soon after installations due to an unstable foundation.

That being said, there are plenty enough of landscapers who also take shortcuts in installing pavers. A red flag would be very low cost for its installation.

These are a few of the shortcuts that were deliberately taken by concrete pourers that we have seen around Victoria.

We have seen where the concrete was sitting directly on soil. There was no gravel at all and so as the dirt shifts and sinks, the concrete above, being one solid space, cannot flex accordingly and major cracks develop across the entire slab. Taking the extra step of putting down and compacting gravel would have taken probably up to 50% more labor time as the installers would’ve been required to excavate further down, dispose of more material which means driving to the yard, bring in gravel, which means a trip to the yard and associated driving times, moving yards of material from the truck to the site, which can take hours, and spreading and leveling accordingly, which can also take hours. Instead, many choose to directly go into the pouring stage and save loads of labor costs. (The cost of gravel and gas is neglible here.)

We have also seen literal tons of sand used. Sand is great to work with because it is easily malleable. It can shift easily to the shape and surface you want. However, the same properties that promote its malleability makes it unsuitable as a stable surface for structures to sit on. The more sand you use, the worse its stability gets. This is why no more than 1” should be used. Imagine building a house on sand. Who would do that? Indeed, nobody would think twice about such a preposterous notion yet we have witnessed concrete pads weighing many tons in addition to the load on top being held up by 1-2 ft worth of sand. The result was massive cracks and shifting in the concrete pad above and it had to be removed at great cost.

Often times when it comes to a high initial cost vs a larger longer term costs, the question becomes one of timescale. If you do not foresee living at a location for more than 5 years, concrete pad is more attractive. Why build something that will last decades when you will just be paying for someone else’s enjoyment? On the other hand, if you want something that lasts and will cost less money long term, interlocking pavers are the way to go. Why?

No structure will last forever. This is obvious. That being said, interlocking pavers will last longer as a whole but also is easier to maintain. The reason is of course, when problems arise, one cannot remove part of a concrete slab or pad. Whereas for the interlocking paver, only sections that are affected need to be repaired and often times, the same bricks or stones can be used, saving on material costs as well. Replacing a concrete pad will set you back thousands whereas repairing a section of pavers will cost only hundreds.

The other difference between poured concrete an interlocking pavers is of course aesthetics. Pavers can be manipulated into intricate interesting designs and come in a variety of colors shapes and sizes. Poured concrete generally speaking, at least in Victoria BC, comes in grey rectangles. While stamped and dyed concrete pads are available, not only do these raise the cost which makes them less competitive against pavers, once they start cracking as all concrete pads love to do, the entire pattern looks very off and the illusion of an interlocking paver design is completely thrown off.

Many homeowners in Victoria BC opt to go with poured concrete for patios, walkways, and driveways because it is perceived as the cheaper choice. While this is true initially, one generally pays for it in the long term with maintenance. Demolition and replacement of existing concrete pads from sidewalks to driveways to patios are expensive, not DIY friendly, and just a major pain in the butt. Many in the concrete pouring trade seems to be taking major shortcuts that severely compromises the structural integrity of the pads and slabs, which accelerate their destruction and replacement that we here at Triton Landscaping have been repeatedly hired to undertake. Not only are interlocking pavers more durable and far more cost efficient in the long run, they are far more aesthetically pleasing and your home more enjoyable.